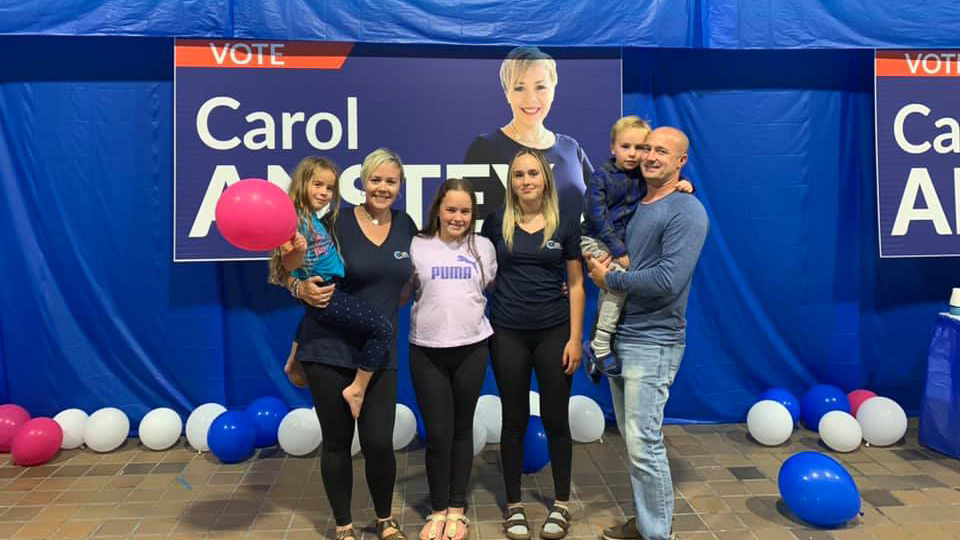 Carol Anstey is a busy lady. Businesswoman. Community-minded volunteer. Wife. Mom of four  – including twins – so why politics? The answer is somewhat complex, but it comes down to one thing: Because she cares.

Like many, her family left for Alberta in the 80s.

“When my parents were starting out, they had to move to Alberta for a couple of years. My parents were actually making plans to move again away from the province because they weren’t overly optimistic about being able to keep their family here and my grandmother overheard me talking to my mom and she said, ‘what do you want for passing this year?’ And I said, ‘I want to stay here in Newfoundland.’”

Her family began to make changes to do just that, and that included opening their own small business. “They worked really, really hard to build that business up so that we could stay here.”

Later, Anstey felt she had to move away too once she finished university.

“We were in Alberta two and a half years just wanting to be home. And then when we were back home, (husband Dwayne) had to fly back and forth to Alberta as a rotational worker. All that has made me passionate about wanting to live here in the province.”

Being a mom has solidified that, she added. “As a mom with four children, I don’t want to see them have to move away. I think families that can stay together and have grandparents helping  … and earn a good income here in the province is something to feel passionate about. And I feel more people should have that ability.”

Anstey knows she has a battle ahead of her. The federal Conservatives have not traditionally done well of late, however, the riding the last federal election did show there was an appetite for change. So, why Erin O’Toole?

“I believe that people, when given the ability to thrive financially and economically … I think that that’s the way to create communities where young people and people who are just starting out can really make a difference.”

‘CONSERVATIVE LENS’
Looking at rural communities and one of the biggest things you notice is that a lot of people have had to move away, she shared.

“You’ve got mostly older people left and that makes it difficult for services to continue on in these rural areas … I really feel like the Conservatives have a platform that supports small business and helps out that person who wants to create a robust economic situation for themselves. I guess that’s why I sort of look through that Conservative lens.”

She added she also feels the swell of support to move from the same-old-same-old. “I think people want change. And I think that’s a good place to start from. I feel like I have something to offer.”

As for O’Toole, what is it about his leadership that she admires, we ask?

“This whole process of me getting involved has been happening for several months, even before I became the official candidate. And so it was really important to me, even before I threw my hat in the ring, that I did my own research.”

She spoke with other Conservative female MPS and she asked how O’Toole was in terms of his leadership.

“I felt like in order for me to face this big uphill battle, I sort of had to be completely in.”

She heard nothing but good things, she added. “I always heard that (other MPs) respected his leadership. They respected the fact that he wanted more women in his caucus.”

As to the current lay of the political landscape with six Liberals and one NDP candidate, that’s perhaps not the best, she added.

‘The Liberals have dominated the Atlantic region for a long time. So I guess I put the question back, has that been helpful? Because that’s certainly something that you hear a lot that that’s a  little bit of an older mindset where you had to be the same colour as the government in power, because that means that we’ll get more. And I don’t necessarily agree for obvious reasons.”

She added that voters need to expect more.

“What I would say is I think there’s been a certain level of complacency as far as the Atlantic provinces are concerned, because it’s always just been a way of life that people vote Liberal. I think it’s almost something that gets taken for granted and complacency sets in. It’s like, ‘OK, well, we’re secure there.  From a political perspective, maybe there doesn’t need to be a lot of emphasis as to how we’re going to help that area grow.’ That’s that’s my perspective on that.”

What does she bring to the table?

“Well, I think there’s a couple of things. I don’t think I’m the typical type of person that you see step up and run in this arena, because I have a younger family. And I think that when you’re at this stage of your life – like I’m not winding into retirement – I still have a lot of passion around the issues. That’s one thing.”

A strong work ethic is another.

“In every area of my life, whether it was having twins or growing a business or everything that I’ve ever been involved in, I do feel like I work really hard and it’s really important to me to do a good job. I think I will bring that to the table.”

She knows this isn’t going to be easy by any stretch of the imagination.

“In order for me to do this, it’s going to take a lot of hard work because I’m pushing against a mindset right now. I feel like I’ve had opportunity in my life to work in a lot of different sectors and for that reason, I feel like I’m in tune with some of the obstacles and struggles that the people in the riding are going through.”

Top concerns? “Some of our rural communities have some real big challenges. And some of those are access to health care, rising cost of living for our seniors, a lack of economic growth and opportunity, and just a lot of frustration, especially around the fishing industry. In a lot of these rural communities, that’s the anchor. So I feel like (fishing) is a big area of concern in the riding. And the other issue is the outmigration issue. We’ve had a declining population since 2006, and that’s something that we should all be paying attention to.”

There are things that can change, she said. “I think that comes down to people wanting to have economic opportunity in the province. I can tell you, as a small business owner, one of the big things that I see is that with help and support, small businesses can start employing more people and really get anchored into their community and that needs attention.”

What’s her hope? That her hard work pays off and that she gets an opportunity to give back.

“I think as a business person, all that work lead up to this point in my life, I’ve had to learn balance. The longer you’re at it, the better you get at it. This is no different than anything else. You have to want it.”

Any last message, we ask?

“I would just say I think this is an important election. I think we have a unique opportunity. A lot of people want to come home. And I think if we pull up our socks and get to work and try to create a better economic environment, I think we’ve got a real opportunity to see some good things happen.”

To learn more about Carol Anstey, click here. To browse all of our election 2021 coverage, including extended versions of our magazine features, click here