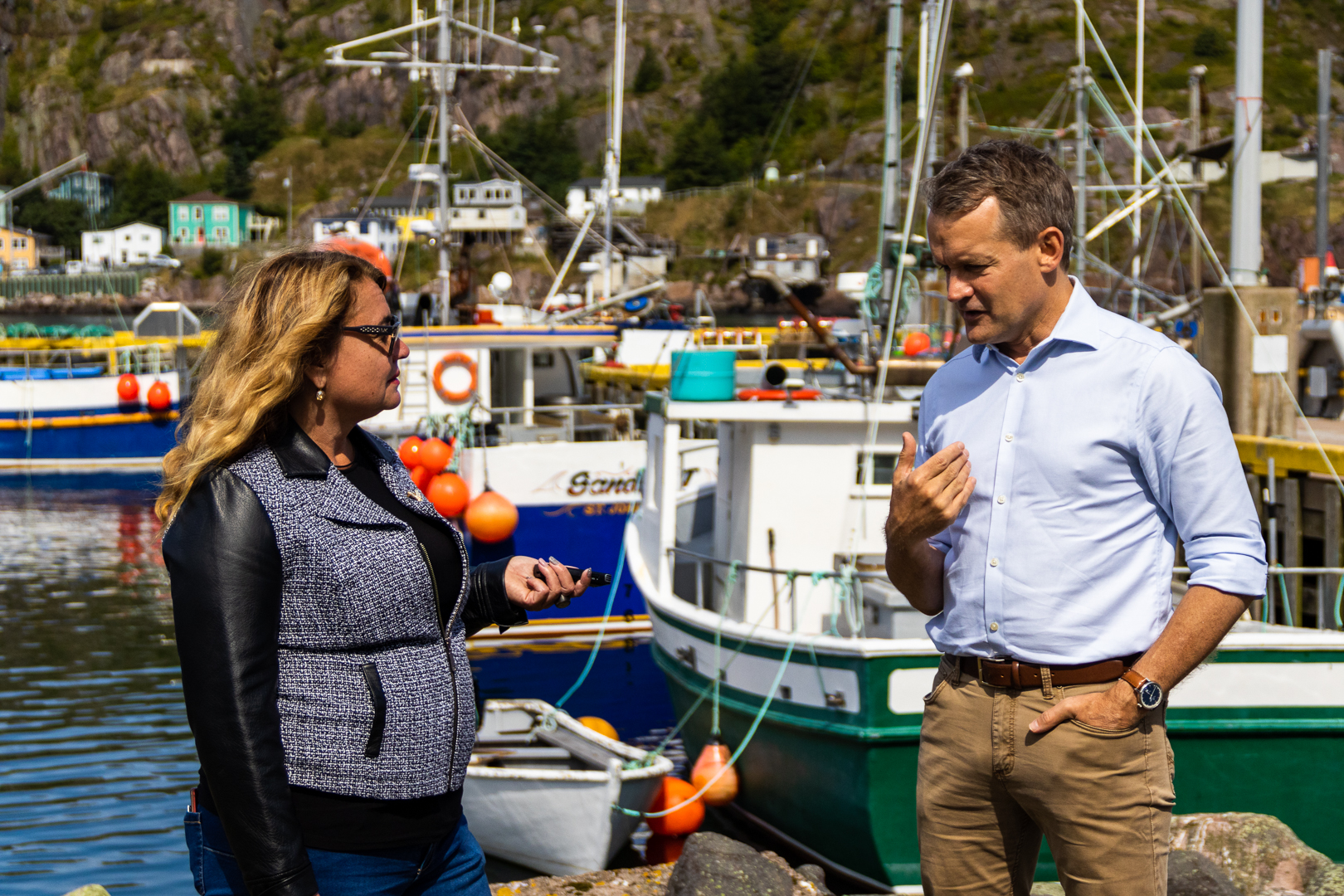 It’s a beautiful day in downtown St. John’s, and at Prosser’s Rock, the name given to the Fort Amherst Boat Basin, the MP for St. John’s South — Mount Pearl, Seamus O’Regan, obviously feels right at home.

Fishers are done with this summer’s recreational fishery on the very day we visit and as O’Regan wharf-yarns with a local filleting fish, it’s apparent there’s both a love of the place and its people.

O’Regan might not be the fists-up type federal politician Newfoundlanders and Labradorians are accustomed to getting behind, but O’Regan – who has served as Minister of Natural Resources as well as Minister of Indigenous Services and Minister of Veterans Affairs – shared that just because he’s not out there being visibly disruptive doesn’t mean he doesn’t have to make sure his voice is heard.

“When you trust somebody and you trust their judgment, you spend less time with all foolishness. I always say ‘I’m not here for the show. I’m here to do the job.’ And the sooner I can cut to the quick and get to a deal, the happier I am,’” he shared.

O’Regan – referring to the personal friendship he has with both Prime Minister Justin Trudeau and with NL Premier Andrew Furey – said that while having a base to start from is a bonus, there’s no winning ticket either when it comes to matters he brings to the table on behalf of the people of his riding as an MP or the province or country as a Minister.

“Having a friendship and a relationship with a Prime Minister and a Premier, yeah, I think it saves that time. Although if anybody thinks I’ve got an easy ride of it? No. You’ve got to make your case … Any time that I’ve managed to get something done here, whether it be Muskrat Falls or for oil and gas, I’ve had to make a case. I’ve had to work for it. There’s no shortcut.”

O’Regan, who, like many, left this province to work away – many remember O’Regan as a popular host on CTV’s Canada AM – shared that being home is a dream come true.

“Mom and Dad bought their first house in Brookfield Estates. Then I guess I was about three, when we moved to Cornwall Crescent. And it’s just a beautiful street. … We played street hockey all the time. Mom would say ‘when the streetlights come on, that’s when you come in.’ Good memories.”

When he’s campaigning there, his team knows to let him take his time.

“I had a paper route there … as long as the paper got there on time it was good, and if it was ten minutes late? They started calling the house,” he recalled with a hearty chuckle.

But then O’Regan feels right at home anywhere in the province. He spent time growing up in Labrador “where winters were winters and the snow actually crunched beneath your feet,” and he also has a passion for the downtown core.

As he takes in the boats, the harbour front and the city’s hustle and bustle, his enthusiasm is obvious.

“I have the whole harbour. So Signal Hill going right around. I have the south side of Water Street and Harbour Drive … Kilbride. Goulds. Petty Harbour. Mount Pearl.

One bonus of a pandemic was that federal MPs who usually only spend weekends in their ridings were home.

“I never left through the whole of COVID, which is incredible. My minister’s office is over there,” he shared, pointing across the harbour.

Cabinet meetings are attended via encrypted video, Question Period in the House of Commons and committee meetings are online and voting happens through a biometric facial ID app.

“It’s amazing. I think no matter what happens after this election, we’re going to figure out a way to keep some of that … We’ve been working solid the whole time, but I think we all appreciate – particularly, as we’re coming out of COVID – how important it is just to see each other face to face.”

Being able to connect with fellow Newfoundlanders and just say ‘how’s this going? How’s that going?’ has been a blessing, he added.

“Some people call it networking, but for Newfoundlanders, it’s just what we do,” he added with a smile.

When the oil and gas industry went through a rough patch, O’Regan shared he connected with that because his friends and neighbours were in this industry. Top issues? We’re still dealing with COVID, he shared, and, like many, he wants to see kids returning to school safely. Vaccinations. Travel. All things that affect people’s lives and health. Climate change is real too, he adds. He’s excited about the role Newfoundland and Labrador can play when it comes to expertise and innovation. “So many skills are transferable to renewables. We have the people and we have the infrastructure,” he added proudly.

From the economy to our arts and culture; every industry has been hit and hit hard. “We’ve got to make sure that we come out of this together.”

When asked why Trudeau, there’s a bunch of reasons, numbers and statistics to be tossed about, but bottom line?

“Because he’s been there for us when we needed him,” O’Regan answered.

“The rate mitigation help “was huge. I started sleeping better after that,” he shared.

We ask what it is, in his opinion, that this province adds to Canada?

“First of all, we contribute to the national economy. We shouldn’t forget that. I say that as a matter of pride. And yes, we still are wanting for a heck of a lot here in this province. There’s no question about it. And going for reelection, that’s what I got to keep fighting for; that next thing.”

But beyond money, we add value in other ways too. “We contribute ourselves as Newfoundlanders and Labradorians. Culturally we are a very distinct people with a sense of humour and a way of looking at life that makes just about any mainland who comes here go; ‘why am I only coming here for the first time?’”

We are such a big and diverse country, and we are without a doubt one of the most unique parts of it, he added.

“We were our own country till 1949,” he said with a smile. As we watch the filleting happening around us, the chatter goes to all the good ol’ rough grub we could be enjoying with a meal or two. Oh, for a bit of hardtack in soak for some fish ‘n’ brewis, he joked.

Any last words? He looks around the city from our boat basin perch.

“This area right here? I’m very proud of it. When I first came back and I wanted to run, I spent a year knocking on people’s doors because I needed to prove to people that I was serious. I could go to a door and ask for their vote and get, ‘oh, you’re buddy from Canada AM’ and I might get a selfie and all that, but they may not vote for me … And one of the first people I met were fishermen here at the Harbour Authority.”

He heard the concerns, and now six years later, things have changed for the better, he added. “We’ve got a lot of fishermen here in the city. I don’t think we ever appreciated that. Now, this is all new … We got a new pier down here for our fast supply vessels for the offshore. We got the new building for the Coast Guard…”

Ten years ago, folks were pulling out, he added. And now? “It’s back and it’s lively and as I look around, it makes me feel good that we’ve been able to get a lot done.”

To learn more about Seamus O’Regan, click here. To browse all of our election 2021 coverage, including extended versions of our magazine features, click here