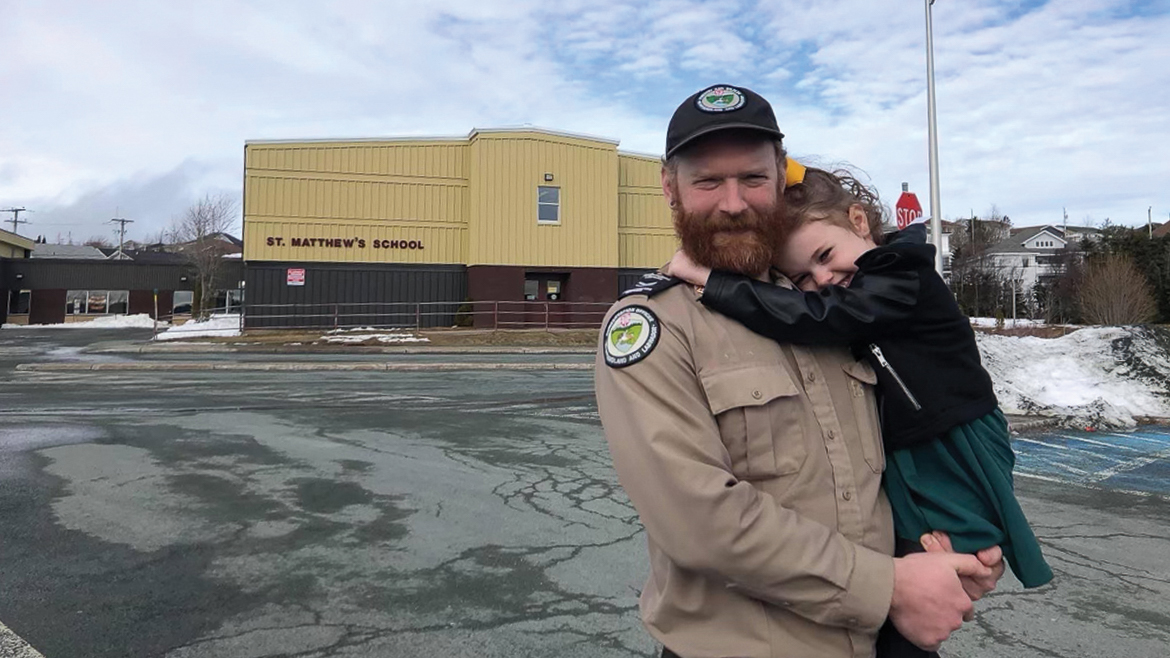 When OZFM’s Stephanie O’Brien first found out she was expecting, she went to the powers that be and booked a day off – six years into the future.

“I said, ‘look, I’m going to need to book the first day of school off,’ and they must have thought I was nuts, but here we are,” the co-host of the number one morning show, The Morning Jam, shared.

While O’Brien admits she might be “a big sook” on that special day, it’s hard to say, she added.

“I cried every day of Kinderstart, so you watch now,” she begins. “I’ll have dry eyes because I got it all out already, but who knows?  I mean, this is a big step.”

O’Brien has been talking about this day with her co-host Randy Snow for a while now on-air. It’s also something she’s been thinking about in her quieter moments. As a popular on-air talent, O’Brien won’t be around much in the mornings as her daughter Charlie heads off to school.

Daddy Drew will be in charge of that and it’s hard knowing she won’t be there most mornings to see Charlie head off for a day of learning.

“I was just thinking about it the other day. The last time you and I spoke I was talking about motherly instincts and how I didn’t have any. And now here I am getting real sentimental about Charlie starting school. Like, it’s crazy. I guess I do have instincts after all,” she said with a chuckle.

Back to school shopping has been fun, O’Brien adds. “It doesn’t really interest her to be buying pencils and stuff like that. We’ve done the whole crayon shopping before so that’s not a big deal. The big thing for her was getting her new book bag  for school.”

O’Brien has promised her husband — who was deployed fighting forest fires in Thunder Bay — that she would wait for his return before doing any back-to-school shopping. That kind of went out the window on one Mall visit.

“I couldn’t stop once I started, so I’ll have to let him take her clothes shopping, but that makes me nervous. She’ll be all in plaid.”

O’Brien’s coworker Mitch Colbourne is the only other on-air parent. While work schedules mean the two don’t get to see one another often, they did bond recently over their children.

“I had Charlie with me the other day when I was off and I said, ‘we’re going to mommy’s work now,’ and Mitch was there and he was so sweet with her. And you can tell he’s a good dad, he’s so adorable with kids. He was just talking to her and you know he knows how to talk with kids because of his own little girl. And that’s really sweet. So we kind of bonded over that.”

What’s Charlie looking forward to most?

“And I don’t even know what happens to be honest. Is it going to be ‘here, let’s play around and learn?’ I don’t know what they do in Kindergarten anymore. So, she’s just going to big girl school and she’ll make new friends.”

Anyone who follows O’Brien on social media knows what a fashionista Charlie is.

“There’s the struggle, right? That’s the power struggle between us. I let her dress herself a lot of the time, but also what some people might think is super strange – like she changes every day multiple times – but there’s often a tutu of some sort and that’s great. I don’t care. I actually think that’s cute.”

“She has this thing where sometimes she wants to wear pyjama bottoms with a t-shirt and I’m ‘no, you can’t go like that. There is a line.’ So what will I do? I guess I’ll try and find a happy medium. Put it that way.”

As for Daddy Drew taking over the reins after that first day, O’Brien laughed. “‘You are going to have to learn to do a ponytail,’ I told him. She can’t go to school with her hair all tangled up. I want to save her independence, but there are also rules.”

O’Brien shared she used to be worried about her daughter like most parents are, but one recent incident made all that fear pass. O’Brien and Charlie were in a lineup and an older child mistakenly said to Charlie, ‘you skipped the line. You have to go to the back of the line.” They hadn’t, O’Brien added, and she wasn’t paying close attention to what was happening. At least at first.

“I hear Charlie go, ‘Don’t you worry about me. You worry about you,’ and she shut that thing down right there. At first, I thought she was talking to me, so I asked her and she goes, right confident like, ‘I wasn’t talking to you, mom.’ Like she was basically saying, ‘I got this. I don’t need you.’ And I went right there, ‘I’m not worried about you not one bit now.’”

The day we spoke was the day before O’Brien and Snow’s two-year on-air anniversary on The Morning Jam. Any big plans?  “Just keeping it going. Sometimes, I get into work and I go, ‘I wonder how this is going to go?’ And then it just goes. Today, we had a great show and nothing was planned. I just look forward to it every day. It’s spontaneous. It’s fun. It’s unpredictable. So I’m just looking forward to keeping that trend going.”