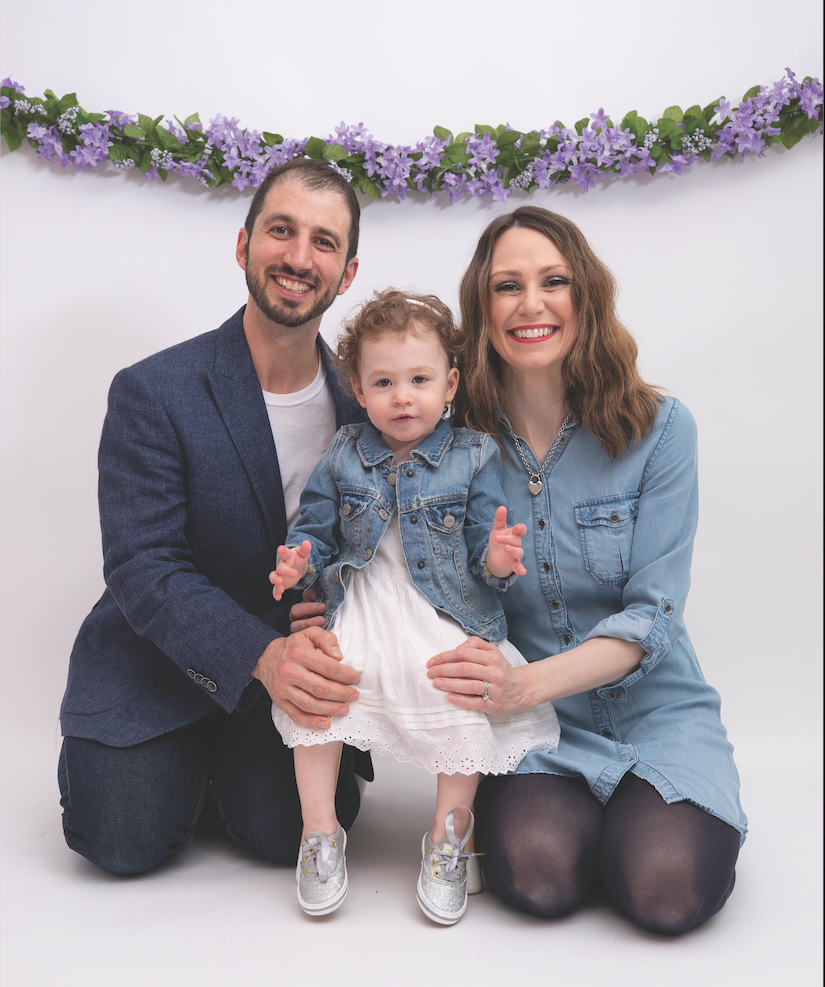 Life simply couldn’t be better for Eddie Sheerr, his wife Susan and two-year-old Emily, but things are about to get just a little sweeter and there’s so much to celebrate

When Emily was born on May 15, 2019, Eddie Sheerr and his wife Susan thought they had the world.

“There was just so much to celebrate. She was perfect. We had our little family. Everyone was healthy. It was a good place to be,” NTV’s Chief Meteorologist (and all-around funny guy) shared.

“Emily is turning two, and she’s at a really fun age. In fact, the older she gets, the younger Eddie seems to become. He is having so much fun with her that they are almost like two kids sometimes,” Susan shared with a smile in her husband’s direction.

There’s news to get out of the way, something everyone’s been ‘expecting’ shall we say.

“We are expecting number two on October 4th,” Susan generously added. While close family members know if Emily will soon have a baby brother or a baby sister, the best news is that Emily gets to experience the joy of being a big sister.

Emily has a halo of curls. It’s impossible to not fall in love with her energetic and spirited way.

Who does she turn after? “Those curls, they come from Eddie. And the energy? Eddie too,” Susan offered.

“I had more hair, and it was curly, when I was her age. I have a picture of me with my grandfather (Phillip Sherman) and he had the same curls,” he said.

As for her personality? “She has lots. She’s fearless, she’s very athletic, she loves being outside more than anything. And she seems to have Susan’s intelligence and my persistence and my lack of patience.”

Eddie and Susan both laugh. Do tell?

“She’s very inquisitive. And she gets that from Eddie. Every day there’s a few new words,” Susan added.

“She started saying more sentences and words and we kind of understand what she means. And while her favourite word is ‘no’ she’s so much fun,” Eddie added.

Speaking of fun, NTV’s weatherman makes the weather, and the news in general, much more fun. From his naturally comedic delivery of bad news (only Eddie Sheerr can make rain, drizzle, and fog sound fun) to his goofy but informative antics on social media, including TikTok, Eddie is someone worth following.

Dare we say that some of his humour and much of his antics resemble ‘Dad Jokes?!?”

He laughs. “Well, I mean, I’m a dad. So the way I can put it is like this, I have cousins that are about sixteen years younger than I am and so now they’re in their 20s, which makes me feel very old. But when I was in my 20s, I’d go hang out with them and they were like 13, 14 years old. And it was like I could revert very easily to being a kid and I still have that ability now. I can go back and be a kid and be goofy.”

“I still want to play like a kid,” he admitted. Susan laughed.

“The reality is he’s always been a kid at heart. Now he has an excuse to act like one,” she teased sweetly.

How has he been balancing work and home in these pandemic times?

“It’s sometimes tough when there’s weather coming in to turn it all off because I know that there’s a lot of people who are relying on my thoughts so they can plan whatever they’re trying to plan. But I find it easier now to disconnect and focus on family time and hanging out with family and keeping Emily occupied. Focus on just being a dad. She’s only this size for a short amount of time so I try and really keep that in mind because she’s not always going to be my two-year-old little girl.”

While COVID has kept family at bay, especially Eddie’s kin who live in the United States, they still connect in whatever way they can.

“My Mom was up for about five weeks in October into November and my Dad was up just before Christmas. We did some socially distanced visits and stuff like that when they were here before they were able to come out of isolation and luckily they were healthy and everything. It was nice to see them. It’s nice for them to see Emily because they hadn’t seen her since she was like six months old.”

Eddie added that he misses his nieces and his brother and his sister-in-law, though he tries not to dwell on that stuff.

“It does make me very sad and I’m missing my nieces dearly. I’m watching them grow up through pictures and through FaceTime and it’s hard to not get emotional about it. But I’m looking forward to going over and getting vaccinated and being able to travel again, hopefully at some point later this year.”

Susan glowed. Pregnancy and motherhood look amazing on her. She smiled. This pregnancy feels very similar to her first one, she shared, though things have changed.

“The difference now is that before when I was really tired or not feeling 100  per cent, I could just kind of come home and lay down if I wanted to. I don’t have that luxury anymore because obviously I have Emily, and it is a bit difficult because in a typical household, both parents are home at the end of the day. But with Eddie on the news at night, I have Emily on my own. It was very difficult being tired and sick and not being able to just kind of give in and lay down. But at the same time, Emily takes my mind off it as well and keeps me busy. So, so far so good.”

Eddie says he’s so proud of his wife.

“She’s such a good mom. And Susan’s mom has been an amazing help too. And I’m just thrilled that Emily’s going to be a big sister. She’s not going to be an only child now and there’s a bit of excitement with that. The sibling dynamic is special, so I’m happy she gets to have that. I’m sure they’ll be best friends and, if it’s like my brother and I, I’m sure they will hate each other sometimes too.”

They both laugh. What is the family looking forward to most of all? Family time!

“I am looking forward to when both kids are a little bit older and they’re able to play together. I mean, at first, it’s going to be hard for Emily because obviously, she can’t play with a newborn, but if parenthood taught me anything, it’s that time passes,” Eddie said.

Eddie loves rowing. Susan is a skater. Any signs of an athlete-to-be in Emily?

“I think she’s going to be an athlete of some sort. She does have incredible balance and flexibility. We haven’t had her on skates yet because it’s been hard with the pandemic and the lockdowns. She was a bit reluctant to put a helmet on her head, but she does wear her bike helmet now,” Susan shared.

Her parents took her to a kiddie gym recently and she “went wild.” ‘She had a blast hanging out on the bars and stuff. She has no fear. We took her to the indoor playground place last weekend, and she just she has no fear.”

We ask if there’s been any terrible twos stuff yet. The couple looks at one another and smiles.

“Oh yeah, glimpses of it. She’s in the stage now where she’s testing boundaries. A couple of tantrums she’s had have been fun. She attached herself to the floor out in public over the weekend,” Eddie said.

Susan said she and Eddie just try their best each and every day.

Eddie, who had been with Emily during her last public tantrum, shrugged.

“Nothing else matters other than her in those moments. She’s a kid and she’s got herself on the floor and I was over there on the floor with her and I said, well, she’ll stop at some point. Nothing I’m gonna do is going to change her mind,” said Eddie.

It’s times like this that make bedtimes even sweeter. They have a routine, and they treasure those moments. Sometimes Emily will pick out the pajamas she wants to wear or the book she wants to read. If she catches daddy on television, she gets excited, though she can also get angry if he doesn’t talk directly to her.

“She knows the music that comes on as NTV News is about to come on and that means that she’ll see me. It’s cute,” Eddie says with a laugh. “She hears the News intro begin and runs yelling “daddy, daddy, daddy!”

The two parents laugh. The day is passing and Eddie needs to get his head into the game. The weather waits for no one!

Eddie gets the last word.

“This year has been hard, but it’s come with many blessings and we’re so proud of Emily and we’re excited to be adding to our family.”