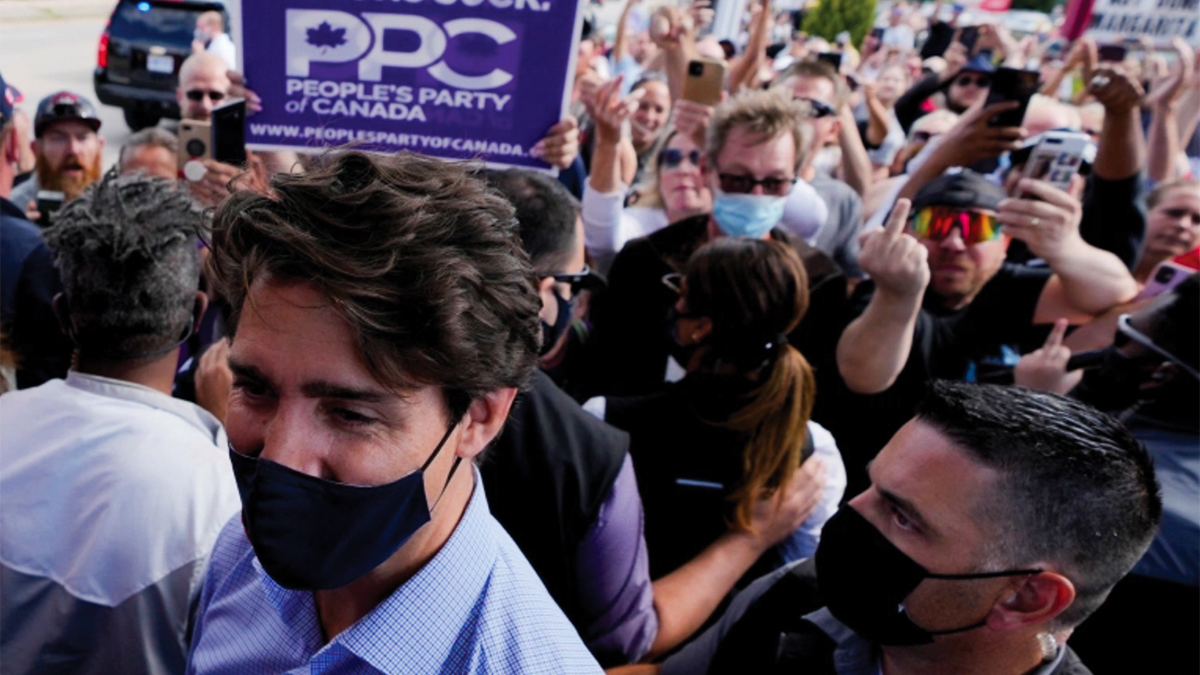 There are aspects to this federal election where you almost must avert your eyes. Several times the Prime Minister had to be extricated from protests that threatened to turn violent. Insults were shouted and, on at least one occasion, rocks were thrown. The issue was the COVID-19 vaccination.

Now understand that sometimes there just aren’t two sides to every story. The world of science says vaccination against COVID and its variants is the absolute key to its defeat. Postings from assorted nutbars on Facebook who are angry at the world won’t change that. They are as silly as the Flat Earth Society people but infinitely more dangerous.

This is what’s so very interesting. The angry snarling faces in the crowds confronting Prime Minister Trudeau remind me of something from far away and at the same time oh so close. They remind me of Donald Trump’s America and the politics of confrontation or, put another way, mob rule.

Don’t pursue your goals at the ballot box or try to convince others of the value of your cause. Instead disrupt rallies or throw rocks and head down a very dangerous road. For sure I don’t have evidence or statistics I can call on, but I’ll bet you dollars to donuts that in this country the anti-vax crowd and the pro-gun crowd are the same crowd; just like in the good old USA. I don’t like that very much. The strange world that I thought was just part of the platform of the orange-haired comb-over champion of the universe  Donald Trump appears to be broader than I first thought, and it’s a spreading disease with its constituency largely from a group that thinks the whole world is out to get them.

My attitude now is not to even argue with that bunch where their platform of debate is limited to the 280 characters that modern tweets allow. I don’t want to convert them anymore because there’s no information that will change their mind. They have read something that went unchallenged on the Internet that supports their “whack job” position. They don’t care what the science says because they only read things that support their belief.

The Newfoundland Herald · COVID-19 | Jim Furlong: At The End of a Tunnel

I want to get away from those people. Bring on the vaccine passport because I want a world where when I go to a stadium or step on an airline or even go to a restaurant, I know that everyone there has two shots of vaccine in them. There’s an argument against that “passport mentality,” but I don’t want to hear it anymore. Get the hell off Facebook and stop talking about your right. “Rights” are part of a two-sided coin. The other side of that coin is “responsibility.”

To check out all of our Election 2021 content, click here. NTV’s Jim Furlong can be reached by emailing: jfurlong@ntv.ca